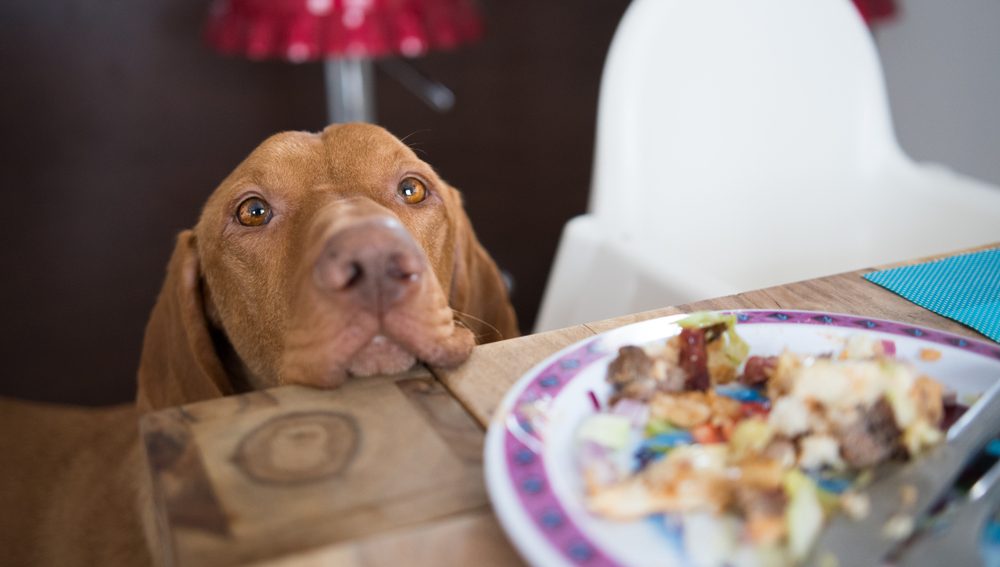 ﻿﻿﻿﻿﻿This Thanksgiving will be tempting to allow your pets to share in the family feast. You may be strong-willed and resist, but not your pets, who may jump up onto counters or get into the trash. Most people know that turkey bones are dangerous for dogs, but any unusual food, especially in large volumes, poses a serious threat—pancreatitis—to your pet’s digestive system. Read on to learn about normal pancreas function, and diagnosis, treatment, and prevention of pancreatitis in dogs and cats.

The pancreas is a digestive organ in your pet’s abdomen between the stomach and the small intestine. Normally, the pancreas secretes enzymes into the intestine that help digest food and regulate blood sugar. The pancreas has several mechanisms in place to keep the digestive enzymes from damaging the organ itself. For the pancreas to function normally, our pets must eat the same amount of the same food every day, which may sound boring to us, but is best for our pets.

The diseased pancreas in pets

If your pet suddenly ingests a large amount of unusual food, especially high-fat food, the pancreas tries to compensate for the food overload by secreting more enzymes, and the sudden excess can begin to damage or digest the pancreas itself. The resulting inflammation is known as pancreatitis. Any pet can get pancreatitis, but miniature schnauzers are at higher risk due to their altered fat metabolism. Pancreatitis causes abdominal pain, and complications can be severe and life-threatening.

Inflammation and damage from pancreatitis is usually confined to the area around the pancreas and liver, and the most common sign in dogs is nausea. In severe cases, the disease can progress to formation of a pancreatic abscess. When the disease process extends beyond the pancreas, the consequences can be disastrous. Inflammation can spread throughout the abdominal cavity and cause peritonitis. The inflammation can release toxins into the bloodstream, causing disease throughout the body. Weber-Christian syndrome, an inflammatory disease of the fatty tissues, may develop, or pancreatic encephalopathy, in which the brain is damaged when fats surrounding the central nervous system are destroyed. Also, pancreatitis can progress to disseminated intravascular coagulation (DIC), in which simultaneous abnormal clotting and bleeding occur throughout the body. These painful, life-threatening complications often require referral to a veterinary specialty center or a veterinary school hospital, and carry a guarded to poor prognosis.

Cats often develop pancreatitis from other causes rather than eating a sudden fatty meal. Problems associated with pancreatitis in cats include inflammatory bowel disease, liver disease, certain infections, pesticides, medications, and trauma to the pancreas. Cats can develop chronic (i.e., long-term) pancreatitis. Cats and dogs can become diabetic following pancreatitis because damage from the disease can affect blood sugar regulation. Pancreatitis signs in cats include decreased appetite and weight loss.

Pets with gastroenteritis and a gastrointestinal foreign body, among other problems, show the same signs as those with pancreatitis, but diagnosing pancreatitis in pets as soon as possible is crucial, so the disease can be treated aggressively to reduce the chance of life-threatening complications. Fortunately, at Harbor Pines Veterinary Center, we can perform a pancreatic test—the specific canine pancreatic lipase test—as well as a cat-specific pancreatitis blood test. These tests, along with in-house blood work and X-rays, allow our team to diagnose pancreatitis quickly in any pet who has inappetance, vomiting, diarrhea, fever, abdominal pain, or a history that fits pancreatitis.

Intravenous (IV) fluid therapy, which helps remove toxins and aids in pancreas healing, is the most important component of pancreatitis treatment. Pets need to be hospitalized until the crisis resolves—often five to seven days—with pain and nausea medications to help relieve their discomfort. Pets are fed a controlled diet of low-fat, low-residue food, and cats are often given vitamin B12 by injection, as pancreatitis interferes with normal absorption. Vigilant monitoring for complication signs is vital.

Call Harbor Pines Veterinary Center if questions or concerns arise about your pet and pancreatitis. During your Thanksgiving celebration this year, remember that rich table food is not a treat for your pet. Keep your pet’s diet consistent, and give thanks that you have helped them avoid risking pancreatitis. ﻿﻿